Chain Gangs, Tragedies, and a Hope for a Brighter Future 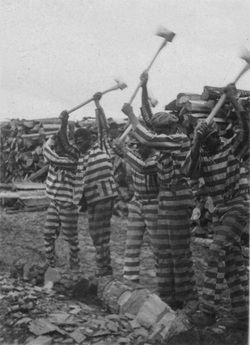 During these expansions, prison chain gangs were exploited to do work on the railroad in order to construct a tunnel just west of Dillsboro called the Cowee Tunnel (Osment, 2008). Chain gangs of inmates meant vast employment and cheap labor for the railroad industry, but in transporting these 19 inmates that day, the boat carrying them to the tunnel site capsized and drowned all 19 shackled prisoners. Sadly, these inmates were buried in unmarked graves on a hill that overlooks the tunnel that they were to finish (Carson, 2005, pg. 208).  “The state of North Carolina leased the convicts to the rail company, and over three and a half thousand men would eventually labor on the rail line. The great majority of these men were African-Americans. The work, fraught with dangers, included laying the rail line, grading, and the excavating tunnels. Over four hundred and fifty men died during the railroad's construction” (Hunter Library of Western Carolina University, 2001). This went to show that constructing railroads through the Blue Ridge Mountains meant dangerous and determined efforts in order to continue pushing westward. Regardless of who owned or operated the railroad, its construction and ultimate completion can be attributed to the hardworking chain gangs whose days were spent finishing the "antebellum" vision for the great state of North Carolina.

Sliding rock, steep grades, and wet ground were only half the battle in tunneling through the other side of the mountain, yet laborers and engineers worked on; constructing looping tracks and tunnels to “combat" the sudden rise in altitude. Unfortunately, the expansion of the WNCRR would be delayed after a series of landslides completely filled the man-made cut will 110,000 cubic yards of rock and debris which had to be removed, and construction of the sight to be started all over again. (Blackburn, 1980, pg. 394-396). Through perseverance and even more determined efforts than before, Wilson was able to send out a telegram on March 11th, 1879 stating: “Daylight entered Buncombe today through Swannanoa Tunnel. Grade and centers met exactly” (Blue Ridge National Heritage, 2011). 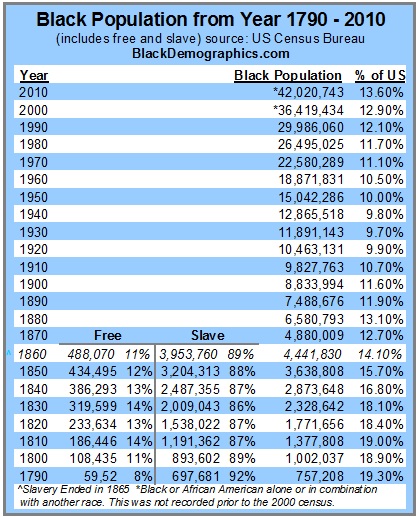 This chart shows the free and enslaved population of African Americans during the mid to late 1800's. Courtesy of: http://blackdemographics.com/population/
Powered by